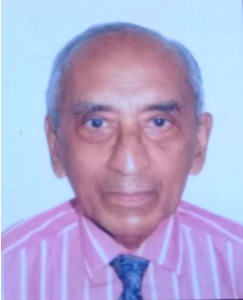 “We must find time to stop and thank the people who make a difference in our lives” – John F. Kennedy”

Today, I am very happy to have been invited to present this appreciation to Mr Leslie Wijesinghe.It was some 49 years ago when I had my first contact with him in teacher-student relationship at
the University of Colombo. He was then the Assistant Conservator of Forests and delivered a course on Forestry and Forest Ecology for the Botany Special batch. Since then, I had many occasions to interact with him as an employee, member of several Committees and Working Groups that he chaired and I am fortunate to have later succeeded some of those eminent positions he has held. I will elaborate these occasions at appropriate places during this
presentation.

Mr Leslie Wijesinghe had his entire school education at St Peter’s College, except for one year when he schooled at Kingswood College (during the 2nd World War). Many years later, in 1988,
he was honoured by his Alma Mater in recognition of his “outstanding services to science”. He entered the then University of Ceylon in 1951. Later he was awarded an Exhibition on the results of the First Science Examination, and graduated with honours in Botany in 1955. His academic qualifications are BSc Hons (Cey.), B A Hons Forestry (Oxon.) and M A (Oxon.).

He was appointed Assistant Conservator of Forests in 1956 and was awarded a Colombo Plan Scholarship to Oxford University for studies in Forest Science, and he graduated with honours in
1958. In Oxford, besides studying Forest Science, he carried out research on the shrinkage properties of wood and his paper on the subject was published in the British journal Forestry. At the Forest Department, he has held the positions of Assistant Conservator of Forests (Working Plans), Divisional Forest Officer (Research and Development), Principal of the Ceylon Forest College and Divisional Forest Officer (Upcountry Division). In 1972, he assumed the position of Senior Assistant Conservator of Forests in charge of the island-wide forestation
programme (set at 14,000 acres afforestation and reforestation and 2000 acres enrichment planting). The targets were exceeded every year during the period he served in this capacity. While in the Forest Department, Mr Wijesinghe excelled in carrying out some applied research relating to the forestation activities.
Sinharaja crusade: In my view, one of the most exemplary services that he has contributed to nature conservation in Sri Lanka was the saving of Sinharaja in late 1970s. During late 1960s through 1970s, for short-term economic gains, the Government had been advised to log timber from Sinharaja to feed a Plywood Factory, described by nature scientists as a “folly and an act of absurdity” that caused severe damage to this large tract of virgin rainforest in Sri Lanka. Due to intense protests by environmental scientists, such as Late Prof. B. A. Abeywickrama, late Mr. Telo

Hoffman of the Wildlife and Nature Protection Society, and others, the Government appointed ahigh level committee for advice on this issue. Mr Wijesinghe was appointed as the Secretary of this Committee which had to crusade against parties such as the Timber Corporation and the Plywood Corporation to achieve a tenable solution to the problem that led to a step-wise regulation of timber extraction and finally to a complete halt in 1977.

Another instance is when he coordinated the Salvinia control programme and played a key role in bringing together the key stakeholders and organizing the multi-disciplinary effort that led to
the effective control of this widespread plant pest. This work involved in introduction of Mr. Wijesinghe retired from the government service in 1991 and during 1991-1992, he served as a UNDP Consultant to the Ministry of Environment and Parliamentary Affairs and in 1992 as an IUCN Consultant in the same Ministry. In 1993, he assumed the position of the Sri Lanka Country Representative of IUCN – The World Conservation Union and he held this position till 1998. It was during this period, I had the opportunity of being a Consultant of the National
Conservation Review Project (1991-1996). This project was jointly conducted by the IUCN and World Conservation Monitoring Centre (WCMC) for the Forest Department. Therefore, this time Mr. Wijesinghe became my employer (1993-1995).

From 2004-2010, he was attached, for varying periods, to the Ministry of Environment as the Lead Consultant for undertaking, in collaboration with other consultants, subject matter
experts, government agencies and Departments, etc., preparatory work aimed at nominating selected properties in Peak Wilderness, Horton Plains, and Knuckles range for inscription as a World Heritage under the UNESCO World Heritage Convention. Mr Wijesinghe, with other consultants, prepared the nomination dossier for the Central Highlands of Sri Lanka. The nomination was accepted by UNESCO and The Central Highlands of Sri Lanka was declared a
Natural World Heritage.

Membership in Professional Societies, Associations, Committees, Expert panels,
Commissions, Delegations and Editorial Boards Over thirty positions have been held by Mr Wijesinghe; a few of the notable contributions being: He initiated work and provided technical guidance for the preparation of the Red List of Threatened Species in Sri Lanka.

He developed the structure for, and guided the preparation of the National Biodiversity Action Plan, using material collated by individual consultants.

Mr. Wijesinghe functioned as a visiting lecturer in forest ecology in the honours degree course in botany at the University of Colombo (1969, 1970). As a student I benefitted from his lectures /
demonstrations on forestry and forest ecology and this was my first encounter with Mr Wijesinghe, 49 years ago.

• Awarded a University Exhibition on the results of the First Science examination in 1952.
• Colombo Plan scholar, University of Oxford, 1956-1958.
• FAO Fellow studying forest harvesting techniques in Western Europe, 1966-1967.
• Selected by US government to participate in an International Visitors’ Programme in the USA,
1983.
• Received the NARESA Merit Award for outstanding research in the field of biofuel energy.
• Awarded Certificate of Honour by St Peters College for outstanding contributions to science,
1988.

Mr. Wijesinghe married Yvonne Fernando, also an honours graduate in Botany in 1959. They have three children. The son Rohan is an accountant residing in Australia; daughter Achala is a banker and is now in New Zealand; the third is Mayuri. Here, therefore, the Institute of Biology and we colleagues “have found time to stop and thank an exemplary and illustrious individual – Mr Leslie Wijesinghe – who has made a difference in our lives” (in the words of President John F. Kennedy).

Previous Post The 38th Annual Sessions of the IOBSL on 28th September 2018
Next Post Sustainable use of the biological wealth of Sri Lanka: under-explored plant resources