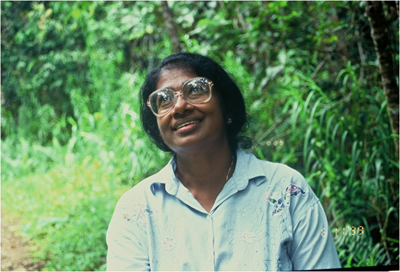 The President and the council of Institute of Biology, Sri Lanka, Distinguish guests,Ladies and gentleman. I consider it is a great honour and privilege to present this speech to felicitate Prof. C.V.S. Gunatilleke, an eminent scholar and a well known scientist, who contributed to inspire and mentor young and upcoming academics as well as scientists.

Malwattage Celestine Violet Savitri Gunatilleke was born on 30th July 1945. She had her primary education at Little Flower Convent, Bandarawela and secondary education at St. Bridget’s Convent, Colombo. She entered to the University of Ceylon, Colombo in 1965 and then moved to Peradeniya campus in 1967. Prof. Gunatilleke completed her undergraduate career in 1969 with exceptional merit, obtaining a First Class Honours in the Special Degree in Botany, a rare feat at that time. In 1970 ,she was recruited to the Department of Botany, University of Ceylon at Peradeniya as an assistant lecturer.  In 1971, having won a Commonwealth scholarship, she proceeded to the University of Aberdeen, United Kingdom, to pursue her postgraduate studies.  There, she obtained her M.Sc. in General Ecology and Ph.D. in Tropical Forest Ecology and Conservation. Her Ph.D. thesis on ‘The Ecology of the Endemic Tree Species of Sri Lanka in Relation to their Conservation’ is widely considered a land-mark in quantitative ecological research in Sri Lanka. Upon her return to the University of Peradeniya after completing the post-graduate studies, she was promoted as a Lecturer and then as a Senior Lecturer at the department of Botany, University of Peradeniya. Subsequently she was promoted to the posts of Associate Professor in 1988, Professor in 1995 and Senior Professor in 2000 on the merit promotion scheme.

Prof. Savitri Gunatilleke has shown a great interest in forest conservation. Her vast contribution towards conservation of the Sri Lankan flora began with the initiation of her long carrier of ecological research, first, in the lowland forests, Kanneliya, Gilimale, Kottawa in the wet zone, Daragoda and Barigoda in the intermediate zone and Ritigala in the dry zone. Since 1977, her main research focus was on Sinharaja rain forest, where she aimed at understanding the conservation value of its tree flora, while it was still being logged by the State Timber Corporation. Her research findings, along with those of others, made a significant contribution to the designation of Sinharaja as a World Heritage Site.  Even to date, she continues her ecological research in collaboration with younger generation of field biologists.  In addition, her research interests have been in a number of other forests in Sri Lanka such as Kanneliya, Hiniduma, Peak Wilderness and the Knuckles, which are of high biological value and some of them have since been designated as protected areas, either nationally or internationally.

Professor Savitri Gunatilleke’s contribution to the advancement and dissemination of Science in Sri Lanka is equally praiseworthy. She shared her immense knowledge on ecology and environment for national development. She served as a member of the National Man and Biosphere committee, a consultant in preparation of “Biodiversity Action Plan” of the Ministry of Forestry and Environment (1997), helped in the preparation of the project document on the “Sri Lanka Conservation and Sustainable Utilization of Medicinal Plants” for the Ministry of Health and Indigenous Medicine (1997) and was a member of the “Biological Science Advisory committee” of the National Science Foundation (1997-1998).  In 1999, she contributed her knowledge as a consultant for the Encyclopaedia Britannica’s (India) section on Biodiversity of Sri Lanka. She was a consultant, of the section on ‘Loss of Biodiversity’, of Ministry of Environment in 2001 and also a member of the Agriculture and Forestry Advisory Committee at the National Science Foundation from 1999-2002.

Prof. Gunatilleke was a pioneer in the field ecological teaching and research in Sri Lanka. Through field courses and training, she drew the attention of her students to the rich biological heritage of the island’s forests – a global biodiversity hotspot – considered among the best ‘outdoor laboratories’ in the world for education on biological diversity. Prof.  Gunatilleke, with the help of her colleagues established a mini-nursery cum arboretum and a students’ working herbarium and museum which store specimens from different ecosystems of the country in the premises of the Department of Botany, University of Peradeniya. This is benefited to undergraduates, post-graduates and others interested in plant ecology and plant biology. At the post-graduate level, Prof. Gunatilleke contributed to formulate the course curricula for the M. Sc. Degrees in (a) Wildlife Ecology and Management and (b) Biodiversity Conservation Management offered by the Post-graduate Institute of Science, University of Peradeniya.

Professor Savitri Gunatilleke is an erudite scholar and an academic of the highest calibre. She is the author of over forty research papers published in peer reviewed journals and five books in which she publish her research findings. She has more than thirty chapters in books published by both national and international publishers such as Academic Press, University of Chicago Press, Smithsonian Tropical Research Institute and so on.  She has over thirty publications in internationally/nationally edited conference proceedings and over ninety communications on dissemination of ecological information to her credit – a true indication of her scholarly work. Her excellence in research was recognized by the Sri Lankan government awarding her the Presidential Research Awards in the years 2000, 2001, 2004, 2005 and 2006, and the Merit Award for Scientific Excellence in the field of Environment and Biodiversity in 2006 by the National Science Foundation of Sri Lanka.

Prof. Savitri Gunatilleke’s high calibre of research is also evident from the research collaborations she had with eminent conservation scientists worldwide. She managed to secure the financial assistance for research through international competitive research grants. Darwin Initiative, UK; EU-Asia through Aberdeen University; John D. and Catherine T. MacArthur Foundation, USA; USAID; National Science Foundation, USA through Harvard University are among the prestigious research grants she obtained. She was also a recipient of a number of competitive research grants from local institutions such as the National Science Foundation and Sri Lanka Conservation and Sustainable Utilization of Medicinal Plants Project.  Prof. Gunatilleke had been a supervisor/co-supervisor of many post gradute students from both local and foreign universities.

Prof. Gunatilleke served as a Sri Lankan co-principal investigator of the Sinharaja plot in the global net-work of Forest Dynamics of the Centre for Tropical Forest Science programme of Smithsonian Tropical Research Institute, a reviewer of grant applications submitted to the International Foundation for Science, Sweden, a resource person for field excursions to Sinharaja for advanced students of the Institute of Ecology and Nature Conservation, University of Vienna, Austria, in-country advisor for students visiting Sri Lanka on exchange programs between the University of Peradeniya and Harvard University as well as Yale University in USA and Oxford and Aberdeen in the UK.

Professor Gunatilleke was awarded fellowships from number of institutions for her excellence in research. In 1982, she won the Charles Bullard Fellowship of the Harvard University, USA. She was an Associate of the Arnold Arboretum of Harvard University, USA in 1982-83 and again in 1992-93. In the year 1993, she was appointed as a Short-Term Research Fellow of the Smithsonian Tropical Research Institute, Republic of Panama. She is a Fellow of the National Academy of Science, Sri Lanka. Prof. Savitri Gunatilleke is a co-recipient of the prestigious Sultan Qaboos prize of UNESCO for environmental preservation in 1997 which was given in recognition of the outstanding contribution to the management or preservation of the environment. She won the Silver Jubilee Award of the International Foundation for Science, Sweden in 1998, in honour of her noteworthy achievements in research supported by the Foundation. In 1998, she won the 5th Woman of Achievement Award for Science, awarded by the Zonta Club-1 of Colombo, Sri Lanka.

Professor Savitri Gunatilleke retired from University service in August 2010 and in appreciation of her long years of distinguished and dedicated service to the University System in Sri Lanka she was appointed a Professor Emeritus by the University of Peradeniya in 2011.

Ordinary teachers direct us along the right path, good teachers impart good education but great teachers groom their students to become leaders and inspire us to seek our own path. They encourage us to discover our talents. Madam you use yourself as a bridge over which you invited the students to cross, then having facilitated their crossing, joyfully encourage them to create bridges of their own. That’s why we are here. I am very much grateful therefore for the opportunity to be here today to deliver the felicitation address for Prof. Gunatilleke, who was a guiding star for us to reach success in our careers. Dear Madam, may you have happiness throughout your life seeing all your students become fountainheads of success.

With best wishes from the bottom of my heart I invite Prof. CVS Gunatilleke for felicitation. Thank you.
Summary Felicitation adderss in pdf format