at 32nd  Annual Sessions of the Institue of Biology held on 28 September 2012 at Sausiripaya Auditorium, Colombo 7. 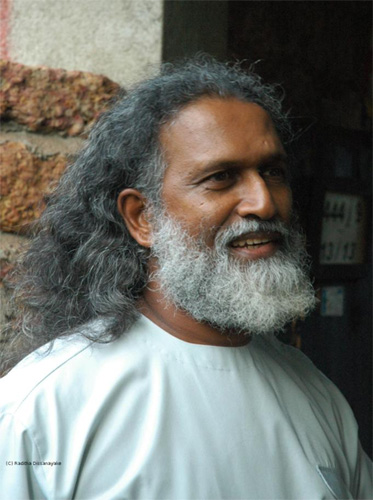 It is my great pleasure to present the citation of Professor Sarath Wimalabandara Kotagama, Professor of Environmental Science in the Department of Zoology, University of Colombo, who is one of the most influential environmentalists and ornithologists of our time. I am indeed honoured and privileged to read your felicitation, sir, in this gathering of your students, colleagues and friends.

Over the years, Prof. Kotagama has made a tremendous contribution towards uplifting the status of environmental education in Sri Lanka. He introduced and coordinated many courses in the fields of Environmental Science, Wildlife Management, Biodiversity Conservation and Ornithology. He acted as the Course Coordinator for the Special Diploma in Wildlife Conservation and Management offered to the staff of the Department of Wildlife Conservation. He also served as the Coordinator of the Masters programme in Environmental Science offered by the Department of Zoology, University of Colombo. He imparted his expertise in the fields of Conservation Biology and Environmental Science to other universities, both local and foreign. His strong focus on field exposure provided hands on training to many an undergraduate, which resulted in increasing their enthusiasm and so instilling in them a keen interest in the natural environment. I still remember the many field excursions he used to take us on, to places that we had never been before. Many of his students are here today and I am sure they will all attest to the fact that these memorable experiences increased our passion for nature conservation.

His postgraduate research at the University of Aberdeen, Scotland, was on the behaviour and feeding ecology of the Rose-ringed parakeet (Psittacula krameril) in Polonaruwa, which I believe was one of the earliest signs of his ardent interest in birds. Over the years his work has focused on the biology, behavior and conservation of birds of Sri Lanka. He has supervised a number of postgraduate students which includes 3 doctorates and 12 masters degrees. He has also guided and supervised many foreign students. His keen interest in birds resulted in research publications in peer reviewed local and international journals. He has authored and edited a large array of books on birds which have proved to be useful to school children, undergraduates, researchers, academics and the general public. It is seldom that you come across a bird watcher in Sri Lanka not being in possession of one of the many illustrated bird guides he has produced. For the convenience of Sri Lankans, these books have been translated into the Sinhala and Tamil languages. His work, over a period spanning four decades, has generated a wealth of scientific knowledge on the birds of our country, and has highlighted the need for their conservation. Accordingly many bird conservation programmes across the island have been initiated and are spearheaded by him.

One of his most significant achievements in the field of ornithology was the establishment of the Field Ornithology Group of Sri Lanka (FOGSL) in the year 1976. It is a non-profit organization affiliated to the Department of Zoology, University of Colombo. Through FOGSL he has succeeded in bringing together persons who are interested in the study and conservation of birds of Sri Lanka. This has generated much interest among laypersons and students in the study and conservation of birds. He has initiated, directed and carried out island-wide field studies on various aspects of bird biology, and established links with international bird conservation groups and programmes. Special mention should be made of the contribution of FOGSL to the international bird ringing programme. The programme activities carried out annually in Bundala and Jaffna are under the personal supervision of Professor Kotagama. This programme has provided training to scores of students on handling and ringing birds. His yeomen service to this field alone has earned him the title of “Father of Ornithology” in Sri Lanka.

Apart from his interest in birds, over the past forty years, he has worked on many other wildlife projects. One of the initial projects undertaken by him was the control the wildboar at the Kantale sugar Plantation. Owing to his experience in the fields of Wildlife Management, Environmental Science and Ornithology, his expertise and services are sought by government, universities and many other institutions, and by individuals. Some of the notable positions he has held are: Director of the Department of Wildlife Conservation over a brief period in 1989 -1990; Local Team Leader/Protected Area Management Specialist in the Protected Area Management and Wildlife Conservation Project (ADB) of the Ministry of the Environment and Natural Resources (2002-2006); Biodiversity Consultant at the Ministry of Transport, Environment and Women’s Affairs (1994 to 1995); and Wetland Consultant for the Wetland Conservation Project (1992).

Through his involvement in these boards he has contributed to formulating reports, management plans, and policies that are of significance for biodiversity conservation in the country. For instance, he formulated the National Wildlife Policy of Sri Lanka in 1990 and authored the National Wetland Conservation Policy in 1997. He has represented the country at many international fora including at conferences of the parties of the Convention on Biological Diversity. He has many international affiliations through which he has been able to bring in foreign collaboration. He was the Secretary General, Pan Asian Ornithological Congress from 1996 to 2000 and was the Vice President, Bird Life Asia Council, Bird Life International, Cambridge, in 2000. He has served as the National Coordinator for many programmes such as the Asian Wetland Survey and the Asian red data programme.

Professor Kotagama has been the recipient of many awards and accolades during his illustrious career. In recognition of his outstanding services he has rendered to his motherland, he was presented with the President’s Environment Award in 2004 and the Desha Manya Parisara vedi Samaja Daja Deshamanya in 2007 by the Government of Sri Lanka, Nijabima Harasara award 2011 by the Uva Provincial Council, and the National Exemplary Citizens Award in 2011. In view of the exemplary service he rendered to uplift national science education, he was awarded the “Sabaragamuwa Sarasavi Keerthi Sri” in 2005 by the University of Sabaragamuwa. The Sri Lanka Association for the Advancement of Science presented him with the Environment Committee Award in 1993 for his outstanding contribution towards environmental protection and in 2003 a Special Achievement Felicitation Award for taking science education to the people. For his research publications, he received Presidential Awards in the years 2003, 2004 and 2005. He has also received a prestigious international award in 2003 i.e. the Distinguished Achievements award for extraordinary service in contributing to environmental reform and education given by the Society for Conservation Biology.