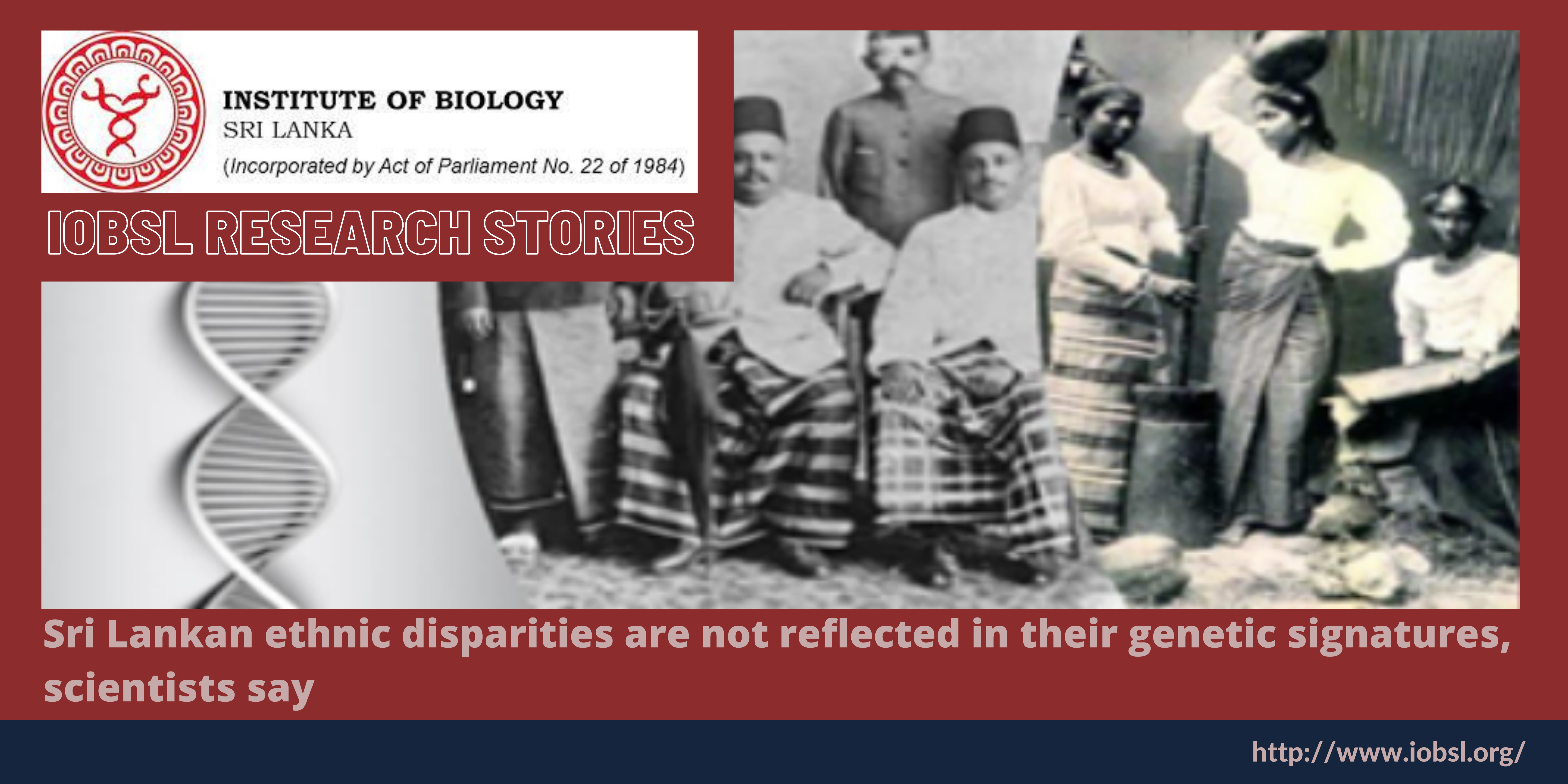 The diversity in ethnicity exhibited by the 20 million population in Sri Lanka, has rooted from numerous groups of migrants who arrived in the island at various historical time periods. However, these ethnicities may not be as different as they are popularly believed to be.

A 4-year-long collaborative study conducted by the University of Colombo and Genetech, has for the first time, reported X-chromosome-based population genetic data for 4 major ethnic groups of Sri Lanka – the Sinhalese, Sri Lankan Tamils, Moors and Indian Tamils- which comprise 99.95% of the total population. The data revealed that the 4 ethnicities are genetically quite similar. The team that led this research includes Dr. Gayani Galhena from the University of Colombo, Mr. Nandika Perera from Genetech as well as Prof. Gaya Ranawaka from the Open University of Sri Lanka. Blood samples of 838 unrelated individuals covering all 4 ethnic groups were analyzed in this investigation, leading to the revelation of some astonishing results.

“What we have observed is that all these 4 groups are genetically very much similar. The standard method of measuring population difference is based on the allele frequencies (proportion of people having different gene copies). Between Indian Tamils and the other three populations, we have observed a subtle difference of 0.3-0.4%, which is the only difference that we have identified based on this method. When considering the other 3 groups, the Sinhalese, Moors and Sri Lankan Tamils, there is no difference at all. They are the same. We were also taken by surprise by the observations,” said Dr. Gayani Galhena, Molecular Geneticist and Senior Lecturer, University of Colombo, who served as the principal investigator of this research.

The results of the investigation have also hinted at potentially significant information regarding the ambiguous origins of the Moors.  “According to historical sources, a majority claim that the Moors are of Arabic origin. They are descendants of Arab traders who came to Sri Lanka and married local women. There is a less popular belief that the Moors may have come from India. Our study actually supports the latter hypothesis. However, it is not a confirmation because the study was not designed in such a manner to address this question,” stated Dr. Galhena.

When analyzed together with numerous other world populations, all Sri Lankan ethnicities with the exception of Indian Tamils, reflected shared Indo-Aryan ancestry with populations from Indian Bhil tribe, Bangladesh and Europe.  “When we compare our population to 14 different global populations from all over the 5 continents, we have observed that Sri Lankans, group with Europeans as well as with the South Asians. This indicates that genetic sharing exists among the South Asians, Europeans and Sri Lankans,” Dr. Galhena explained.

The routine practices of molecular forensics in Sri Lanka are mainly based on autosomal, Y-chromosomal and mitochondrial genetic markers. Identifying the need to expand the scope of molecular forensics to include X-chromosome markers, a novel X-chromosome-based assay had been recently developed by the same research group. This present study primarily aimed at constructing genetic databases for Sri Lankan ethnicities, in order to introduce X-chromosome fingerprinting to Sri Lanka, utilizing this novel assay. However, the course of the investigation took a new turn with the unforeseen results obtained. While this study serves as a promising stepping stone to future research and discoveries, it simultaneously carries across a key message for all Sri Lankans.

“This study has actually shown the similarities between the 4 ethnic groups. This is something very important for the people. It provides a proper message because we are inclined to believe that ethnic races are culturally as well as genetically different,” Dr. Galhena pointed out. “While we might have had those differences in the past, now we have arrived to a point that no more differences can be observed amongst one another, because we have mixed to that extent.”